The Committee to Celebrate Dear Mad’m Day is honored and delighted to have Rod Diridon, Sr. come and speak to us for this occassion.

Rod said in his reply, “I’d be glad to share thoughts about Stella, the Clear Creek Claim and our even earlier times at the Classic Hill placer mine about 12 miles up Indian Creek near the state line.

“Grandfather John Covert filed three mining claims at Clear Creek with Fred Crook around 1910 and Fred, an authentic mountain man, stayed there to do the annual “claim improvements” to hold title. Grandpa wandered off to earn and lose a couple of fortunes. Seems he was a brilliant builder, but imbibed a bit too much.

“After quite a time in set design and construction in Hollywood, Grandpa helped to build the Hurst’s Wintoon “Castle” from the mid 1930s to the late 1940s.

“After an altercation with a couple of loggers in a Dunsmuir bar, Grandpa resettled (was resettled) on the Classic Hill Mine that was purchased by Grandma Allie’s Redding-based logging family (Middleton, Cocherine, and Notley) for timber rights. In the late 1940s and early 1950s Grandpa worked the claim illegally in the winter when the streams were muddy so his tailings weren’t discernible. It was a massive old systems with miles of ditches and high flums, hydroulic “giants” and piping, a small town (blacksmith shop, stables, hay shed, machine repair shop, large orchard, etc.) at the main HQ bunk house and superintendents home dating to the late 1800s….

( After )”Grandma Allie moved to the Classic Hill and they then moved to the Clear Creek claims with Fred. Grandpa built a very nice home, later cut in two and moved to Happy Camp after Caltrans condemned and bought the the claim in the early 1960s to straighten and widen the road…..”

Rod Diridon, Sr. the son of an immigrant Italian railroad brakeman, is called the “father” of modern transit service in California’s Silicon Valley. Raised in Dunsmuir, California, he worked his way through college as a railroad brakeman and fireman receiving a BS in accounting in 1961 and MSBA in statistics in 1963 from San Jose State University. Rod served four years as a naval officer with two Vietnam combat tours.

Dr. Gloria Duffys article on the first annual Dear Mad’m Day may be seen at http://www.commonwealthclub.org/sites/default/files/insightoctnov2011.pdf 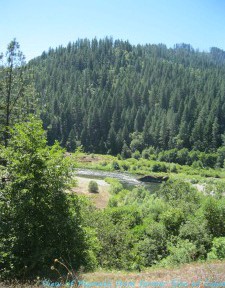 View from the former Dear Mad’m Cabin site of the Klamath River’s new placement from 2011,

Happy Camp is celebrating a literary celebrity of our community. The book Dear Mad’m by Stella W. Patterson has brought many visitors to our community and encouraged many “senior citizens” to lead an adventurous life despite advancing years.

The Happy Camp Chamber of Commerce is planning the luncheon picnic to honor Stella Patterson and those who still maintain the spirit she exemplifies today! The Luncheon will be held in the shade of the trees on the lawn of the Klamath River Resort Inn and Rafting Lodge on the Klamath River east of Happy Camp.

Dear Mad’m Day will be Saturday, August 13th and the picnic luncheon for $5 donation will be at 11:00 o”clock. Sandwiches, ribs, jewel and fruit salads and specialty breads are planned, as well as Dolly’s Strawberry Lemonade and dessert.

We are so pleased that guests who have known Dear Mad’m from their time on the River, will be with us. Peter and Liz Lismer who are related to Stella Patterson and who are writing a book to be published by Naturegraph on her life plan to come, Hazel Davis Gendron, our local historian,  who used her artistic talents for a drawing of Dear Mad’m will bring the portrait with her and numerous other “Friends of “Stella” from near and far will be coming to the picnic luncheon.

Plan to come to this first celebration of a literary treasure of the Klamath, Dear Mad’m!