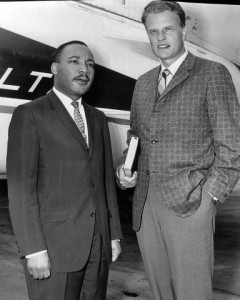 By Judy Bushy, Editor
For Martin Luther King, Jr. Day, Facebook showed a photo of Dr. King and Billy Graham and told about when they had become acquainted. Dr; King died April 4, 1968 when Billy Graham was holding a Crusade in Australia.

Dr. King would be a leader in stopping the murder of babies in our country. A disproportionate number of black children are murdered since Roe vs Wade. It is sad to know that over 55 million babies have been murdered since the Supreme Court of the United States said that it was legal. Making murder legal does not make it right. The morality and ethics of America are in sad state and our Land needs revival.

Billy is looking forward to November, his 95th birthday I think it is. Bev who sang at Billy Graham’s Crusades for so many years is over a hundred already. And still it is the same as back in Minneapolis, Always Good News!!!

With all the needs morally, spiritually, politically, economically: in our hearts and minds, that’s what we need….Always Good News!!!

Between now and next November, Billy Graham is praying for an outreach to America, and it is called Here’s Hope!!! There has been no hope for solutions from our political, social or economic leaders, but there is HOPE…Always Good News!

Pray that America will be revived, Here’s Hope!!