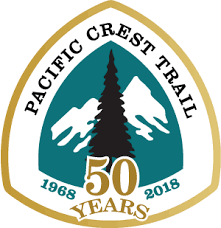 50 Years of the Pacific Crest Trail

Have you ever hiked the Pacific Crest trail??
It is getting more popular in literature lately I think, ever since the movie made from Cheryl Strayed’s biographical adventure book, Wild. Cheryl Strayed, in a reaction of her mother’s death, fer family scattered and her marriage ended, with nothing more to lose, she made an impulsive decision, an inexperienced novice, she would hike the Pacific Crest Trail from the Mojave Desert through California, Oregon and Washington and do it alone. A reviewer said the book is “Told with suspense and style, sparkling with warmth and humor, Wild powerfully captures the terrors and pleasures of one young woman forging ahead against all odds on a journey that maddened, strengthened, and ultimately healed her.” I was disappointed by the details that she gave of most areas of the hike but after Castle Crags, after a brief mention of Seiad Valley, she mentions seeing California Oregon border. The part I was most interested, she just skipped over mostly.

Another book, Zero Days, where couple, Captain Bly and Nellie Bly took a 10 year old daughter on the same hike, from Mexico to Canadian border. They said that sometimes it seemed that it was easier for Scooter than it was for the adults. In fact the mother, I believe had to take some time off near the end of the hike due to physical difficulties. It is after all, a 2,659 mile hike

So this week I finished reading Grandma Gatewood’s Walk, by Ben Montgomery. It is the story of 67 year old Emma Gatewood, a farm lady, who walked the entire Appalachian Trail (AT). . I think that they may falsely advertise it as the longest continuously marked footpath in the world, but is about approximately 2,181 miles long, from Georgia to Maine. (Seems to me, that’s nearly 500 miles shorter than the PCT, but after you hike well over 2K miles, who’s to quibble.) She was mother of eleven children and more than twice as many great-grandchildren. Emma Gatewood was the first woman to hike the whole AT back in the fifty’s, and then she did it again, once as Thru-hiker and last time in sections and then she walked the Oregon Trail from Independence Missouri to Portland at 72. She was well-read, well-spoken and white glove proper lady, but didn’t have a comb with her on the first hike.

These accounts remind me of Indian Ned who lived down by Clear Creek until he was 115 years of age, and hearing of his walking trips, although the only invention of whites he really appreciated was the automobile!! Walking has many health benefits, as well. Even Hippocrates stated, “Walking is man’s best medicine.” Regular and longer walks not only increase your chances of living longer, but also help get more energy, lose weight, stay healthy and positive.
Charles Dickenson once said, “The sum of the whole is this, walk and be happy, walk and be healthy!”