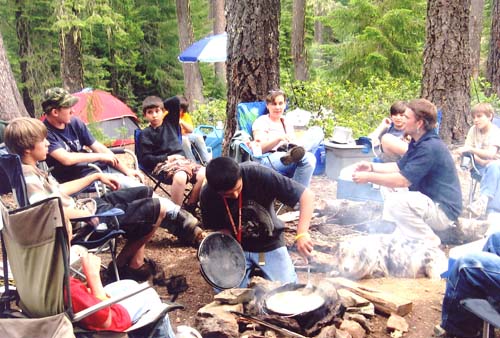 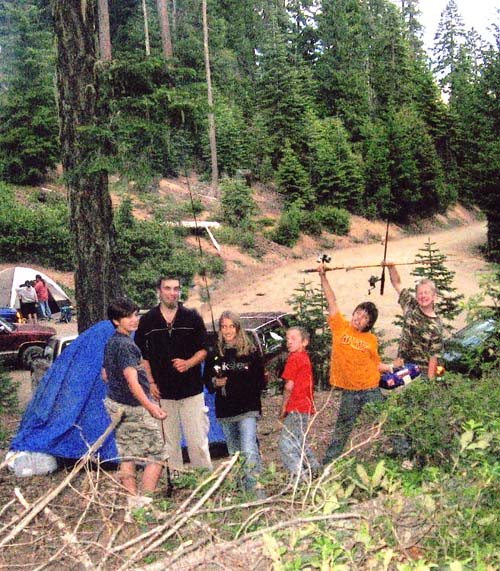 Surprise! Upon arriving in the vicinity of Kelly Lake about twenty miles from home, the older boys, Pihneftuuf Elston, Christopher Riehm and Brandon McCarthy went to look around for a good campsite. Scoutmaster Dolly, who drove the gear pick up with the older boys, went down an incline to look out a potential site, slipped and fell.

That left only the three youngest boys, Cody Sindle, John Cook and Ryan Wilson, who just graduated from Webelos with me to assist her. Thanks to Charles Tello, who was camping in the area and helped us out! Then Quinten Peterson came and got the crew organized to get her safely to camp. The older boys returned to help so that was a big help. There was a rattlesnake a couple feet away from the trail that needed to be taken care of too

Our Scoutmaster was soon sitting in camp with her swelling foot elevated on ice until we could get her to the clinic. The boys fell to work setting up tarps and tents and soon a camp was organized. A campfire circle with downed wood collected by John, Ryan and Cody, provided cooking for hot dogs for lunch.  Everyonce in awhile we’d have showers, but about the time we got another tarp up, it would cease. The boys had fun throwing each other in self defense moves taught by Q!

The boys also pitched in and made venison stew for supper. Under Robyn Eadie’s guidance, Alex and Abbye helped cut the potatoes. When Mia helped and cut her finger, Abbye provided band aid care. Neffers browned the venison. Steven Welin cut up the onion, the most unpopular job of the meal.  The most popular part was s’mores around the campfire, with melody of “Does you Chewing Gum Loose Its’ Flavor on the Bedpost Overnight?” and stories, (scary and made up with additions by each camper) around the campfire.

After a good night sleep, despite the rain and lightning off and on, the boys prepared a hearty breakfast of bacon, eggs and pancakes. Brandon cooked up the bacon. All those pancakes disappeared quickly. Boys ate the food they fixed with gusto!

Then it was off to the fishing derby. Surprisingly,  the fish (1500 lbs of fish had been delivered Wednesday before) weren’t biting as well as the day before. Someone caught and released five the day before in a very short time. It is my theory that those released fish went and told the rest of the fish all about the hooks behind the bait!!!

Well, as you know, all the lightening of Friday ended up starting fires in the area, and all around northwest California . The Fire Camp was set up in Gail Zink Park for Siskiyou Fires. The Forest Service will be giving us updates on the fire situation but we have been very grateful that (except for last Sunday) the smoke hasn’t been awfully bad, but it still continues. We are grateful to the Firefighters who have come to battle the wildfires started by lightening!