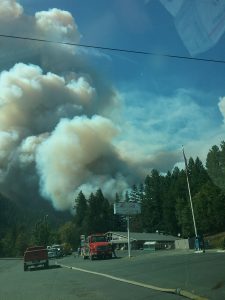 Photo Judy E. Bushy and report on activities of the day Mario Gomez
Happy Camp has been evacuated and nearly wiped out this week.
Mario’s day started when he arrived at the Slater Butte lookout to rescue Brian who staffed the FS lookout. He had reported a tree downed by wind had hit an electrical line, starting a small fire.

This wasn’t to be a normal day, Strong winds made the difference!
By 930 we had fire rolling through houses and blowing across Indian Creek like a freight train.
Now, Mario Gomez was born and raised in Happy Camp. After Happy Camp High School he attended College of the Siskiyous in Weed, so you might say he’s a Siskiyou County boy. Mario has been OPS Chief on many recent catastrophic fires like the Carr fire and Mendocino Complex.

“Being the Incident Command and OPS chief on a fire burning through my hometown, Happy Camp, where I experienced fire fighting for 22 years ;can’t even explain to you!
Mario isn’t the only one to say it was like we were in a bad dream and couldn’t wake up.
Our local fire fighters with Mario, and folks that showed up from out of town did everything we possibly could to save as many lives as possible.

At 11 pm we had the fire roll on top of us in the Meadows like a hurricane from Hell and exploded the whole fist . A raging inferno! For the next four hours with 20 engines and our local crew saving what few houses that remain in the area of the Meadows today.
“It was a complete war zone! Bullets going off, propane tanks blowing up and so much more!

“Fire fighters and law enforcement officers spent that horrific thirty hours are true heroes! I can’t believe with everything that happened. No first responders died. IT’s a complete miracle!

“So many of my family members, friends and coworkers have lost their home and everything they own, Those fire fighters are still on the line fighting the blaze. Heroes and true soldiers, those guys and gals are truly amazing!

Mario left the fire to go join his current team 1 incident manager in Southern California, but wanted Happy Camp to rest assured about being in good hands.. 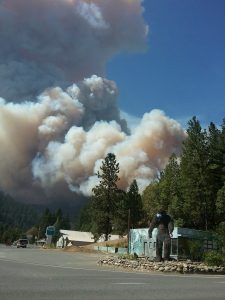