The History of Happy Camp town…. 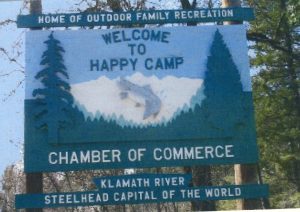 By Judy Bushy
There was a time in Happy Camp when the Karuk Tribe was the whole culture here. They were fortunate in the surroundings which provided generous harvest of acorns, berries, salmon and venison and many other food sources. They were great hunters, clever gatherers, and made beautiful baskets and regalia!

Then there came a few trappers coming through the area, gathering pelts, like Jedediah Smith finding his way back from making it to the Pacific Coast. But trappers were pretty transient, they didn’t stay.
Indian Ned who lived to be 115 told of the first time that he had seen a white man as a teenager. Looking through old records, it seemed most likely they were from a shipwreck on the coast. They didn’t stay long.

Packers went through from an encampment on Scott River heading to the coast. The two murdered men, William Mosier and Mr McGee (or by some give as Mr. Reaves.) gave the new name of “Murder’s Bar” to this place and caused further animosity and violent retribution.

After 1849 discovery of gold which brought on the Gold Rush, some of those gold prospectors came up the Klamath River looking for gold in 1851 and changed the name here to Happy Camp instead of Murder’s Bar. The new name definitely put a more positive view on the town’s public relations. The arrival of the miners meant a lawless time when men came looking to become rich by obtaining enough gold. The gold hunters would hear of a new “find” and head off to possibility of better prospects, so they weren’t very stable. Many gold towns became ghost towns and that might have happened to Happy Camp. It did to Indian Town just up Indian Creek Road, which had a much larger population than Happy Camp at one time. There’s not much left of what used to be Indian Town however, yet Happy Camp endures.

After the Gold Rush, when the gold mining became something that happened more by corporations, the mills that had made lumber for the building of mining equipment became the start of the timber industry that once had five or more mills in the vicinity of Happy Camp. That was a very prosperous time for Happy Camp whether one worked at a mill or falling or hauling logs.

Thanks to cutbacks in available timber, about 1995 the Stone Forest Mill which had round the clock shifts closed, the population was drastically affected. The advice from economics experts seemed to want to trade those good paying jobs for breadwinners in families to tourism paying minimum wages and small business.