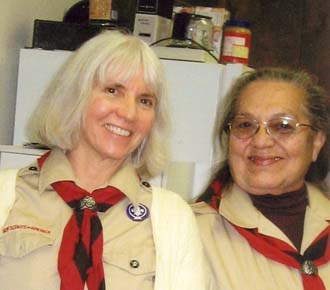 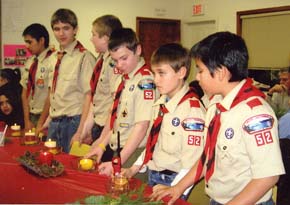 Happy Camp Boy Scouts have been very busy this fall. All of the merit badges and the camping experiences they have had culminated Friday evening with a Court of Honor held after a dinner at the Assembly of God Church in Happy Camp.

Only James Simmons had already received his Scout badge from when he moved to Seiad Valley from Washington. Now, however, all the members of the troop have received this award. They also have achieved the Tenderfoot rank, first step on their way to earning the Eagle Scout Award which is their goal.

Thanks to Scout Masters, Carol Sharp and Veronica Salvage,Troop 52 had been held together in the past few years. They have worked at Snowcapades and gone to summer camp as well as working on invasive weed projects and planted feed for elk. They also appreciate the community help and support that is given through volunteers and buying popcorn when they are fundraising.

This year the boys got really serious about going on with their steps to achieve the Eagle Scout Award in the future. The new Scout master, Dolly Elston, was enlisted to lead the troop and the Patrol leader from the boys is her grandson Pihmuftuuf Elston. Alex Eadie and Alex Garcia are the two newest members of the group, Alex G. being one of six boys to bridge from Webelos to Boy Scouts a year ago at the Blue and Gold banquet in February 2007 and Alex Eadie joining two months ago. Christopher Riehm, James Simmons and Brandon come from Seiad Valley for the meetings in Happy Camp.

The Troop would really appreciate men who would be willing to volunteer to take the boys hiking and fishing or teach them skills for merit badges. Many of the boys have completed the first aid, canoe, and wilderness survival merit badges and are looking rorward to learning more in the future. Scout Master would appreciate volunteers from the community to hike and teach the boys things for earning the merit badge skills that they will need to accomplish.