How did Our Bigfoot Get to Happy Camp?? 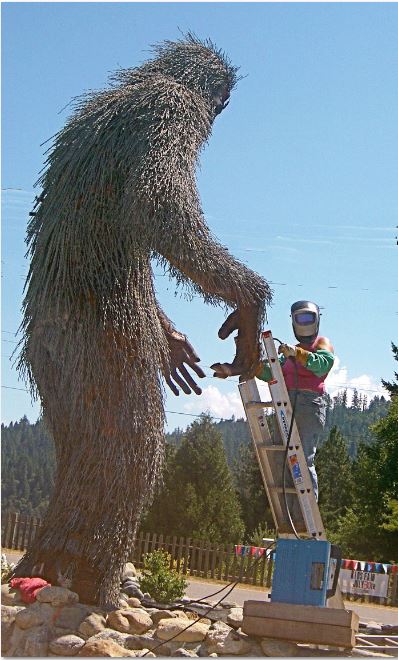 What is the first thing you notice coming to Happy Camp? It appears that, for many at least, it is our Bigfoot Statue at the corner of Highway 96 and Davis Road. Whenever visitors come to town, they usually can be seen taking their photos with the big guy!!

It all began when Cheryl met Sculptor Ralph Starritt, famed for transformation of junk into works of art. Her enthusiasm for the project began to grow and I recall her excitement when she reported on her project at a meeting of the Happy Camp chamber of Commerce!

It was early 2001 during a River Clean-up that a conglomeration of fabulous litter began to be collected in the Forest Service parking lot. Cheryl Wainwright organized the community to collect this junk metal for a special project and clean up the River at the same time.
As sometimes happens, it took a longer time as we might have supposed to get enough material and donations and get the Bigfoot Statue built, but the whole community watched, and many helped the project take place. Contributions of scrap metal, rocks, and donations from Frontier Café, Evans Mercantile, Clinic Pharmacy and the Forest Service came in for supplies, equipment, and lodging for Mr. Starritt when he came to town for the project.
Eventually, Bigfoot found a home on the corner of Highway 96 and Davis Road and attracts quite a bit of attention there!! It is appropriate that it is on the corner where the Klamath Siskiyou Art Center has met for years, and faces the corner where they have bought the place that is becoming their new Art Center, since it is the largest artwork in town. Well, perhaps not, Diann Hokanson made us several murals, and the one on the side of the Market at the other end of Davis Road is 109 feet long, which is longer than Bigfoot is high!! There is also a sepia colored stage coach scene on Evan’s Mercantile on the side nearest the Brick Building. There was a beautiful color mural on the side of Pence’s Hardware, which became Karuk Building Supply and was obliterated when painting for the new computer operations that building has now become.

An amazing Bigfoot is about to rise up out of the junk pile in the Forest Service parking lot. Sculptor Ralph Starritt, famed for transformation of junk into works of art, was in town on July 13 and 14 for the start of the Bigfoot project.

Local citizens have contributed junk metal to the project, organized by Carol Wainwright of Happy Camp. Keep an eye on the Forest Service parking lot this summer as Bigfoot grows in stature. 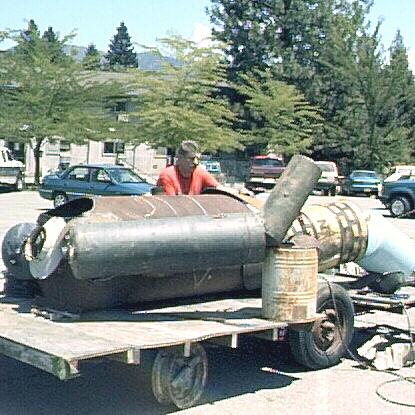 Donations are still being accepted

Metal donations are still welcome in the Forest Service rear parking lot. Any volunteer sculptors in town can participate in the building of Bigfoot. Monetary donations are needed for supplies, equipment and Mr. Starritt’s lodging and other expenses while he is in town. Donations are tax-deductable and can be mailed to “HCAP Bigfoot Project” P.O. Box 640, Happy Camp, CA 96039. Donations have already been received from Frontier Café, Evans Mercantile, Clinic Pharmacy, Happy Camp Elementary School and the U.S. Forest Service.

Bigfoot is coming! An artistic rendition of the legendary forest creature is to be created from metal collected by the community. Sculptor Ralph Starritt will be in Happy Camp for a few weeks this summer to create this unique Bigfoot sculpture. Mail went out to all Happy Camp residents requesting metal pieces of all sorts brought to the Forest Service parking lot on Friday, July 13 from 9 to 5. This metal will be incorporated into the sculpture project, and donating a piece of it is the opportunity of a lifetime for Happy Campers.

Examples of metal donations needed are sheet metal, baling wire, cable, chain, rebar, and round or square tubing. Welding and cutting supplies and a grinder will also be useful. Also needed is a 12-16 foot long dual axel trailer, requested for about three months to build the sculpture on, and a bit of land for putting the sculpture on permanent display.

Any volunteer sculptors in town can participate in the building of this monster. Monetary donations are needed for supplies, equipment and Mr. Starritt’s lodging and other expenses while he is in town. Donations are tax-deductable and can be mailed to “HCAP Bigfoot Project” P.O. Box 640, Happy Camp, CA 96039. Donations have already been received from Frontier Café, Evans Mercantile, Clinic Pharmacy, Happy Camp Elementary School and the U.S. Forest Service.