Awhile back I promised you more information on the Mid Klamath Watershed Meeting that was held at the Grange. I’d shared their camp and Teen Stewardship Intern Programs and how Will Harding had shared about their fisheries work. The third part of the presentation was about the Foodshed Program.
Ramona Taylor had discussed the Mid Klamath Watershed Council Community Foodshed Program. She explained that in your pantry today you mights find a variety of foods from around the world, but the Foodshed is based on increasing the economic prosperity of our community as well as stability and vitality as well as help a lot of people who have food insecurity now—they don’t know if they will have adequate food for their family tomorrow.

They offer a variety of free seasonal workshops on various topics to help with this, sustainable agriculture, harvest and food preservation, fruit tree pruning and grafting, butchering livestock for food, and fruit and fish canning to name a few.They emphasize buying fresh, and buying local for shared benefits all around.

They collaborate with others to help them to make a difference in these food areas and while they can’t lobby senators or politicians as a non-profit organization they can help those in our community with these concerns to be informed.

They offer stipends to those who present workshops on these types of topics and usually find knowledgeable presenters locally. They also have used an apple press with school children to help them see that applesauce doesn’t only come from a can on the grocery store shelf. There is an Orleans Farmer’s Market and Exchange which they are involved with. They did obtain an instructor from the coast for the mushroom workshop as identifying edible varieties is so critical. They also had a spring seed exchanger with Sandy Bar Ranch.

It has been a dream of many in our community to have a legal kitchen for use of the bakers and food preparers of our community so perhaps this is a possibility of how we can accomplish this with the help of the Foodshed Program. They have a five year grant that has just begun so we expect to see them accomplish great things in our communities in the coming years.

What are Humanitarian Daily Rations? 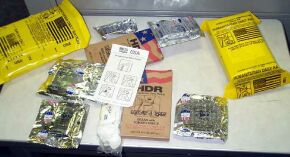 WASHINGTON, Oct. 7, 2001 — In addition to attacking the Taliban regime and terrorist facilities in Afghanistan today, U.S. air operations include the delivery of some 37,000 Humanitarian Daily Rations to Afghan refugees.

The daily ration was specifically designed by the Defense Department for use in emergencies to feed and sustain moderately malnourished people until more traditional feeding methods are restored.

The meals are nutritious, culturally sensitive and cost- effective and have been praised by the United Nations and the international relief community. Since their first use in 1993, they have emerged as a significant and lasting contributor to the fight against hunger.

The rations are pre-packaged, ready-to-eat foods that provide an entire day’s nutritional requirements. Each ration packet contains two main vegetarian meals based heavily on lentils, beans and rice, and also complementary items like bread, a fruit bar, a fortified biscuit, peanut butter and spices. Beans with tomatoes, beans and rice, and bean salad are entrees among the five available menus.

Humanitarian rations come in bright yellow packaging for easy identification on the ground when air-dropped. They “float” down to populations with no parachutes. The packets are marked with the words, “A Food Gift From the People of the United States of America,” and include illustrations depicting how to eat the foods.

Hundreds of thousands of the rations were first air-dropped over isolated Bosnian enclaves on Nov. 22, 1993, as part of the humanitarian relief effort Operation Provide Promise. Since then, more than 8 million of the rations have been distributed to refugees worldwide, including in Iraq, Cuba, Bosnia, Rwanda and Haiti.

A typical Humanitarian Daily Ration packet. The yellow, plastic pack is designed to “float” to the ground once dropped by transport aircraft. The packet contains meals that can be eaten by virtually anyone, regardless of culture or religion. The United States began delivering 37,000 rations to Afghan refugees Oct. 7, 2001.