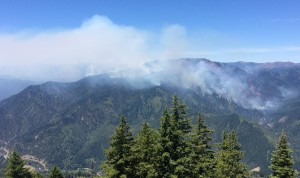 Last weekend, the weather was beautiful. Pony Fire is being held steady, under 3,000 acres even though only 63% contained. It’s a beautiful place, with absolutely gorgeous views that make you want to burst out singing like the opening song in Sound of Music! There’s wet meadows with beautiful wildflowers and yet lightning keeps starting fires. New Fire shirts, in a gorgeous rainbow of bright colors and even tie-dye patterns, are available from a third vendor.

You know, people who work in the woods are sometimes looked down upon by the “radical environmentalists,” but they don’t understand. Do you remember in the Smokey Bear song, the verse that goes, If you’ve ever seen a forest when a fires raging..and you love the things within it like a mother loves her child…then you’ll know why smokey tells you as he sees you passing by, remember, please be careful, it’s the least that you can do!!” All the Forest Service people I’ve ever known, including my husband who was a temporary FS employee over twenty years, although he had been career employee when younger, they love the forest and working out in the woods. When they see the wildfire raging, and its a beauty there, with meadows of azalea’s, yellow lupine, the historic Kelsey Trail, spotted owls mating pair of long record and the views that inspire more than the greatest cathedral, it really hurts to see it destroyed and then sit and rot while people with no understanding of the Creator providing trees for human use and instead standing until the next fire brings them rolling down the hill endangering fire fighters. They haven’t been put to good use and thus become a catastrophic danger in the future. We love the forest and are grateful that the Lord gives new board feet for use each and every year it grows!

Lightning on Monday night June 6th (6/6/16) ignited more wildfires on the Klamath National Forest. One of the fires, 15 miles southwest of Happy Camp near Pony Peak, has grown to approximately 150 acres by Tuesday.
The Pony Fire is in remote forest west of Highway 96 and east of the Siskiyou Wilderness, a half mile southeast of Pony Peak. A helitack crew responded to the scene Tuesday morning and assessed the fire, then withdrew when conditions became too dangerous. The Forest Service used retardant-dropping aircraft throughout Tuesday to reinforce an existing ridge-top containment line. As of Tuesday evening the fire grew to 150 acres. Due to the growth of the fire, steep terrain, and difficult conditions, the US Forest Service has ordered additional air and ground resources, including a Type 2 Incident Management Team, which will manage the fire from Happy Camp.
The Dillon Fire, also from a lightning strike, is near Dillon Creek and about three miles west of the Pony Fire. The fire is 0.1 acre and smoke-jumpers are on scene.

Four new fires were detected near Happy Camp on Tuesday. Two of the fires, Jackson and Peak, are north of Jackson Peak and both are 0.1 acre. A twenty-person crew is split between the two fires. The Horse Fire, on Frying Pan Ridge, is a single tree and firefighters are on scene. The China Fire, near China Peak, is approximately 2 acres and has a twenty-person crew on scene. Three other fires from Sunday night lightning (Elk, Lower, and Little Grider) are contained.

We are praying for the safety of the firefighters and grateful for all the work that they do, and the support staff as well. There was an interesting article about the Mountain Medics serving on the fire, but sorry to hear that two had to have emergency care—an anaphylactic shock case and kidney infection sent someone to the brick and mortar hospital for care. Mountain Medics was contracted to provide medical care on the Pony Fire, and arrived in Happy Camp June 8th with a state of the art medical trailer complete with two cardio-monitors, and an added four wheel drive ambulance. We are grateful for anything that will keep the Fire Fighters, who are protecting our neighborhood, safe and healthy!

Thanks to all the firefighters, some from Happy Camp recently went to Canada to fight a very large fire there, and other places, and all those who have come to Happy Camp to fight local fires as well!! 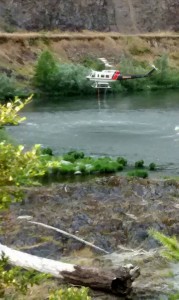 Thanks to all the firefighters, some from Happy Camp recently went to Canada to fight a very large fire there, and other places, and all those who have come to Happy Camp to fight local fires as well!