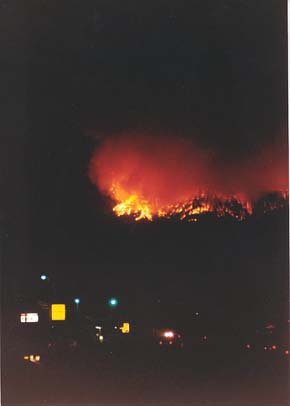 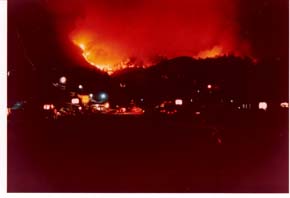 The above photos of Happy Camp during the ’87 fires are by Jim Waddell and Kerry Waddell respectively. Thank you for sharing the photos with Happy Camp News readers!

Just two days before Labor Day, 1987, after a summer of rainless heat had baked the woods to kindling, over 11,000 lightning strikes hit and the western states began to burn. During the following 8 weeks the worst fires in nearly 100 years devastated 9 states, including 1,300 square miles in California and Oregon. The wildfire devastation included 406 square miles of the Klamath National Forest and became known as “Fire Siege ’87”.

The lives of three firefighters were claimed by “Fire Siege ’87” on the Klamath National Forest. Heavy smoke trapped by temperature inversions plagued firefighters and rural residents for weeks on end. Firefighters from across the country, including U.S. military, federal,  state and county agencies, as well local residents joined forces to combat the fires. At the peak some 8,003 people battled the wildfires.

The parallels between “Fire Siege ’87” and the recent China-Back and Elk Complexes are impressive,  stated Forest Supervisor Peg Boland. “It takes all of us working together to manage a major fire suppression incident. The help we recently experienced is an excellent example of working together to successfully achieve a common goal that benefited the communities as well as National Forest natural resources.”