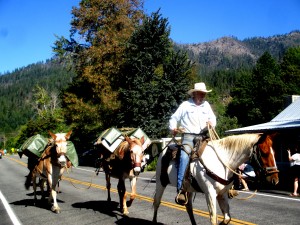 Seiad Valley is a beautiful mountain town on the Klamath River Highway 96. Saturdays Seiad Valley Day was great fun and now a happy memory! For the first time in the over thirty year history of Seiad Valley Day, they had a Grand Marshall! Lolly Jones was the first Grand Marshall because she has been an amazing asset to the Seiad Valley community helping with Seiad Day and keeping the town trash free. She started the Adopt a Highway program in our town. She is also like a second mom to many of us. Thank you for all you do, Lolly!
Before even the Grand Marshall car in the parade, of course, Bill Roberts and Peggy Goshgarrian and George rode by on horses and mule and pack mules also. It’s always a good start to a beautiful parade.
West Timbrook drove a 1947 Allis Chalmers Model B Tractor with his sister, Leeann. Sister Jenny was taking photos of the whole parade! Dave Timbrook came with his 1944 Allis Chalmers tractor, and right behind him was a 1937 John Deer plow, and then a 1942 Western Tractor, and a 1930-1945 Corn s Sheller, followed by 1912 Fairbank Morse and Mr. Pig bringing up the tail end of his antique contraptions!! 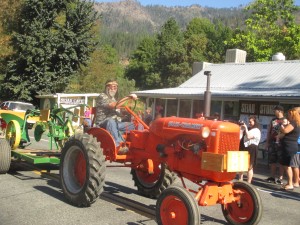 Aaron Mopas, grown up- to drive the Seiad Rescue, and seeing how many people he could nail came next. However, his driving was so circumspect that he didn’t nail any of the people even with large crowds watching the parade go by. He was followed by the Seiad Fire vehicle Engine 32217.
Erik Haskell of the Happy Camp Fire Department drove the Fire vehicle Chief 3300. Nate Rhodes drove the 3312 Happy Camp Fire rig. All of these vehicles were throwing candy to the crowds enjoying the spectacle, of course.
From Happy Camp Ambulance Charles Feheley and Dan Effman brought up the next emergency vehicle. They were followed by the U.S. Forest Service Engine 326 from Happy Camp, Water Tender 21 Prevention 23 with people, but who notices when Smokey Bear is aboard!! Good to see Smokey! Next was Happy Camp Engine 326 with Captain Brandon Cortes, firefighters Ike McAbier and Joe Worthington. Kenny King was the Fire Engine operator for Happy Camp’s water Tender 21.
Was a 1991 VW Fire Engine from Germany, a brightly colored red vehicle with German lettering? Very unique!! This was driven by Chris and Megan Stutz. A Honda XR75 was driven by Jarrett.
Bob Hokanson came by in a gorgeous ’03 anniversary model corvette. He also was advertising the Happy Camp High School 1960’s class reunions which will be next weekend in Happy Camp. Incidentally it is also the 50th Anniversary of the Bigfoot Jamboree.
Jeff came next with a 1994 Mercedes 500 Benz. Followed by the Beautiful young Greenberg Girls! Satu and Celeste Greenberg were driving a 1960 MGA 1600 Roadster. I thought they were off in New York so it was neat to see them in Seiad Valley! David Greenberg followed in a 1967 SAAB 96 2 stroke.
A 1992 Miata carried Reverend Eddie and Fred Kelli from 2nd church of fun next in the parade. Roy came next in his beautiful 1953 Bentley. Bill 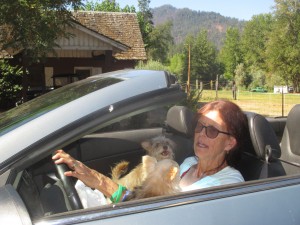