A Tale ending Just over the Hill at Applegate. . . . 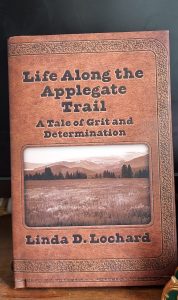 Come meet the characters along the Applegate Trail!

Judy E. bushy
[Yesterday I was given a great story to read! I’m so grateful for the gift of a book, “Life Along the Applegate Trail!

This book is the story of a young bride on her way to Oregon Territory just as it might have happened in 1846. Quests makes the trip with oxen pulling her covered wagon, and it is really instructive in the joys and hardships of such a trip!! Questas husband suddenly dies leaving her a widow. Staying by his grave is dangerous for a woman alone, and this book proceeds to tell of the rest of her journey with about 20 wagons heading to Oregon Territory.

As Questa says, “More unmarked graves dotted the top of the hill, along with assorted pieces of furniture, a heavy skillet, and extra clothing. It was as if those who crossed before us were reinforcing the importance of tightening out loads before, rather than after, crossing the mountains if you wanted to be sure it was not the last mountain you climbed.”

She also learned that “Hardships didn’t always come in big events. It was the daily grind of walking for 10 hours a day behind a wagon that was blowing dust back to you r face, pulling your skirts from berry vines, finding a place to go tot he bathroom in private while on the desert. It was having a toothache and no powders to help with the pain, or feet blistered and sore because there was no Dennis to make you a new pair of shoes. It was every day of every month for five or six months without a break that caused pioneers to lose their drive and sometimes their mind. It caused them like oxen, to STOP. Right where they stood or fell down. Sometimes to shed some tears before getting back up, other times lifted up by their fellow travelers. Taking turns keeping each other strong, or at the very least, moving.”

The author, Linda D. Lochard, had been writing this tale for 25 years, after being immersed in 150th Anniversary of Oregon and Applegate. She even traveled un a wagon a month on the Applegate Trail celebrating the Sesquicentennial. That led to her writing this story, about “characters” that she became acquainted with, either by their diaries or the reenactment.

Since Linda has been researching her Cherokee history and how it is related to other tribes, and frequently dances in Pow Wow’s I was surprised there was only one Native American character, called Dennis rather than his Native name, in the story. Perhaps she is planning to tell that side of the story in a subsequent novel.